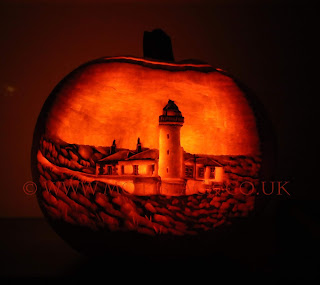 Low Light Pumpkin Carving, 2019, Moti Black
View this image on RedBubble
I am an artist who works in watercolour, photoshop and pumpkins.
I sell my work at East Neuk Open Studios and The Pittenweem Arts Festival.
I also have a RedBubble shop where you can buy prints and other merchandise featuring my work.
In my spare time, I work towards my dream of becoming a writer.

You can find me on the following social media sites

In 2003, I received ESRC funding to work on my thesis on Disability, International Non-Governmental Organisations, and Uganda at the University of Sheffield (the joint top department for Politics in the UK).

In 2008, I left Academia with a completed thesis and a passion for equality and diversity. I worked as a project manager on a government funded gender equality drive with a national Quango for two years.

Over the years I have also completed a number of Open University courses covering topics such as writing fiction, web design and psychology.

In 2010 I became treasurer of the Tarot Association of the British Isles and chose to focus my life on more spiritual and creative work. I stood down as treasurer in 2019.

I was attuned Reiki I in 2011 and Reiki II in 2014.
I began exhibiting at East Neuk Open Studios and The Pittenweem Arts Festival in 2019.
I finished my first novel, 'The Casa Martyrs' during lockdown in 2020.
In my spare time I worship my cat, play Minecraft, feed my Duolingo obsession, walk, and garden.