Pumpkins Twenty Three to Twenty Nine: The End of the Line

Unfortunately, I missed my Halloween target for carving thirty one pumpkins, but I kept going. I was aching all over, I had put on weight from sitting still, hunched over pumpkins, carving for over a month, and I was getting callouses on my hand from handling the sharp tools. But I kept going. 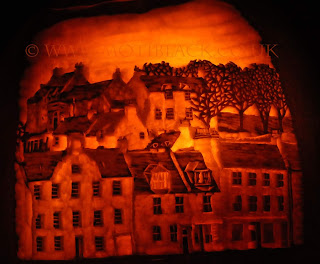 I rushed into this pumpkin straight after my two day marathon for Pittenweem West Shore, and I think the quality suffered for it. Although the brightest house is painted white, so does stand out, artistically, I don't think it works, and my hand was hurting so much, it really was a struggle to carve this design. It was also the only pumpkin where I had to race the sunrise, as I need total darkness to photograph the pumpkins, and only just got this one finished in time, and may have jumped into photographing it a bit sooner than I would have if I wasn't exhausted, in pain, and dawn had started to break. 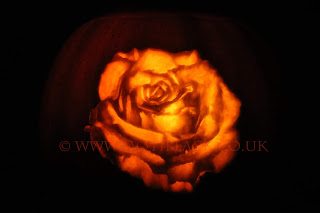 I wasn't happy with this one at all at the time, but it has grown on me a bit since.  The first pumpkin I ever carved in this style of carving had been a rose, and had turned out quite well, so I thought this would be easy and very striking. However, as this was a white rose, and the last rose was red, I think the colour variation was a bit more subtle, and required a less exhausted carver, and a crisper pumpkin. At this stage of the season, the pumpkins I could get hold of were starting to age. Some were rotting (I lost five or so home grown pumpkins as they rotted before I got to carve them) and shop bought ones were starting to get very stringy, so it was like carving loosely clumped together spaghetti, and the flesh of the pumpkin was much thinner than at the start of the season. 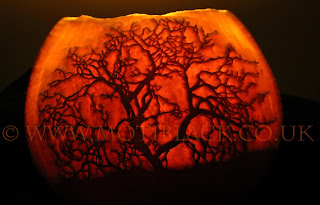 This is the only pumpkin I carved without top. In an attempt to save one of my home grown pumpkins which was starting to rot, I cut the rotting top off, and thought I had picked a simple, quick design to carve. It didn't take three hours. In fact, this was the second two day carve I did, and was a race against the rotting flesh, which was going brown and soggy as I was carving. it was not the nicest sensory experience, but I did like the visual result. 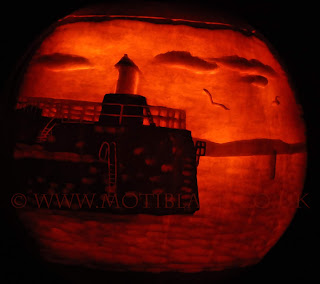 This was a simple and fun carve, although the pumpkin was far past its best. The seagulls were created by slicing into the flesh and inserting slithers shaved from the top of the skin. I think this one looked much better IRL, as the 3D roundel tower doesn't quite work at this angle 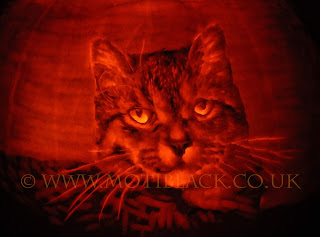 The pumpkins were getting very hard to work with now. The insides were very stringy, so it was very easy to knock off a big chunk when working on small detail. I wasn't so keen on this final image, but have since been asked to put it on redbubble, as someone wanted it as a cushion cover. 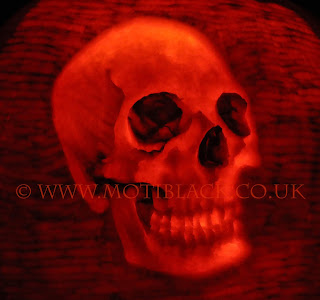 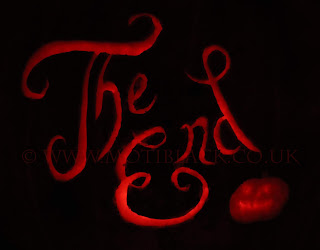 I carved two pumpkins without counting them earlier in the month (the first attempt at Low Light on the Isle of May, and the second seagull: pumpkins eighteen and nineteen.) So, although this is pumpkin 29, it is my 31st pumpkin, so I can finally lay down my carving tools and rest. I had to pick a simple design, as the inside of the pumpkin was coming away in chunks, and the flesh was very thin.

Posted by Caroline Blackler at 13:59