Pumpkin Owls and Preparing the Pumpkin 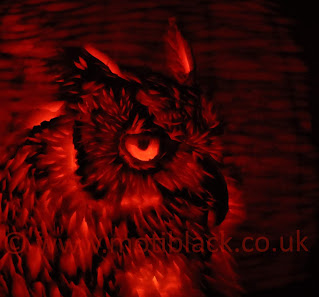 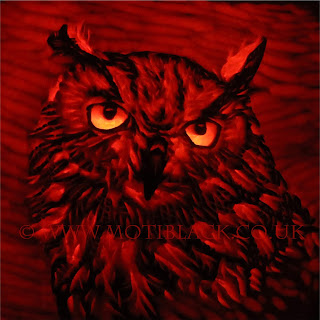 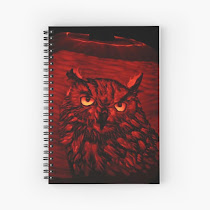 So I've fallen behind by a day because of a nasty bug, but I hope to catch up in a few days when I'm feeling better. I finished the second owl last night, but tweaked it a bit tonight before uploading it to RedBubble.

I created these designs using a u-gouge and craft knife. I didn't really plan the images before I started beyond deciding where the eyes and beak were going to go. I marked them with a craft knife, then played around gouging out the paler feathers, and adding detail with the craft knife.

To make the background, I used a shallow U Gouge to slowly scrape away layers of skin, to about 1-2mm deep, so the darker areas stood out from the background.

As I'm still very much under the weather, I will deal with an easy topic for the hints and tips section of this post.

Preparing the Pumpkin for Carving

Before you carve, you will need to cut out a hole, at the top, back or bottom of the pumpkin, and pull, scoop, wrestle, and charm the insides out. 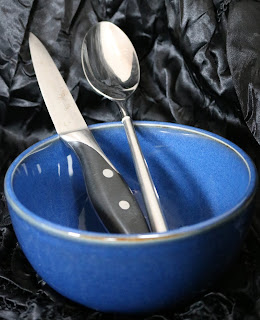 For this stage, I use a sharp kitchen knife, a spoon and a cereal bowl.

If you are putting the hole at the top, it is a good idea to put the knife in at an angle, so the hole is narrower towards the centre of the pumpkin flesh, and wider at the skin, so when you put the top back on, it sits neatly back on the pumpkin. As the pumpkin flesh will contract a bit as it gets warm and dries out, too straight a line, and the pumpkin top will fall into the pumpkin. (This happened to me the first time I carved a pumpkin.)

Also make sure the hole is big enough so you can easily get the spoon inside to scrape away the insides, but not too big so that it distracts from the carved image on the side.

Once you have gone round with the knife, keep inserting the knife between the cuts to ensure the flesh is cut all the way through. When you can start levering the top away a little bit, you probably have cut through all the flesh. Using a sturdy enough knife, or one you don't mind bending, you can lever off the top, and start scooping out the insides of the pumpkin and putting them in the bowl. 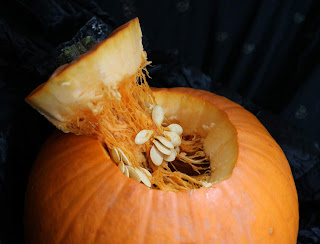 If you don't want to waste the seeds, there are plenty of recipes online to roast them, and they do make a lovely snack. The stringy goop can also be used in the carving. Last year, I wanted to add more definition to the legs of a Puffin I had carved, as the legs were melting away into the rest of the design, so I laid a couple of strips from inside the pumpkin over the legs, and they really stood out, without looking too conspicuous.

To remove the insides, I use a combination of grabbing and yanking with my hands, and scraping the sides down with a spoon.

If you want a rustic look to your pumpkin, you can leave it with some of the insides intact. It gives it a bit more of a messy, cobwebby, orange, uneven finish. 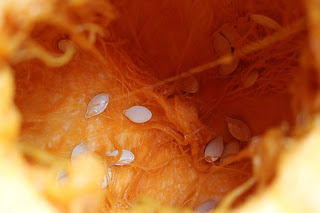 If you are going to carve a more intricate pattern, you will want to use the spoon to scrape the inside smooth, so the image you are carving is not fighting an uneven light source coming from inside the pumpkin. 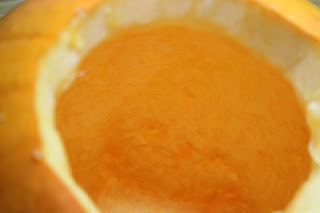 However, the hole doesn't need to be on top. You could cut the bottom of the pumpkin out, hiding the hole in the finished product, cut out a hole at the back, or include lots of air holes in your design. I have some designs I am planning to carve later in the month which will use each of these techniques.

Posted by Caroline Blackler at 15:47