I carved fewer pumpkins this year because I decided doing 31 carvings was insane and it took me months to recover. I couldn't get hold of compost in spring because of the Covid Lockdown, so I was late getting my pumpkin seeds planted and had no ripe pumpkins of my own in October. Finally, I had finished my first novel during lockdown, it had been run through three beta readers, and I was in the home stretch of proofreading and not wanting to be distracted.

So here is a little overview of each of the pumpkins, and I will go back to last year's posts to add any tips that I feel I have learned from my third year of carving pumpkins. 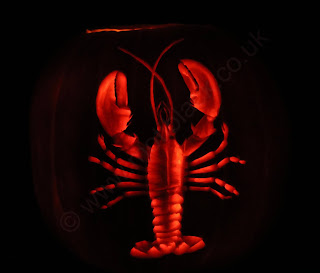 Lobster Pumpkin Carving, Moti Black, 2020
View this image on RedBubble
I was determined to get a lobster as I thought the colours would be perfect. I seemed to have forgotten how to carve over the last ten months, but by my third attempt I was starting to get back into the swing of things. (This was my third attempt.) 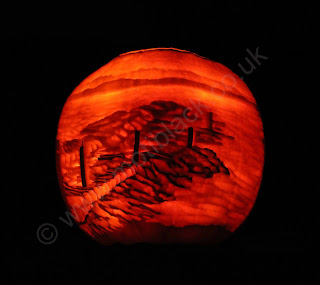 Pittenweem Old Harbour, Pumpkin Carving, Moti Black, 2020
This image looked better viewed in real life, as the image moved around the pumpkin, so the shadows and blocking were a bit off in the photograph. 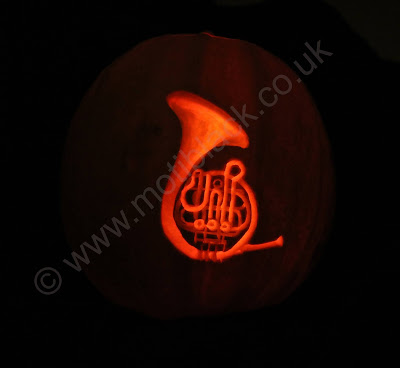 French Horn, Pumpkin Carving, Moti Black, 2020
My niece plays the French Horn, so I thought I would try a brass section pumpkin. I chose to carve the image quite small, so I could decorate one pumpkin with a whole brass section, musical notes and text. This meant that digging out the tubes to different depths to create the 3D image was a technical challenge, and the final image didn't photograph as well as I planned. I did a trumpet on the same pumpkin, then abandoned this idea, as Halloween was fast approaching, and I had a window to fill. (I will add the photo of the trumpet at a later date.) 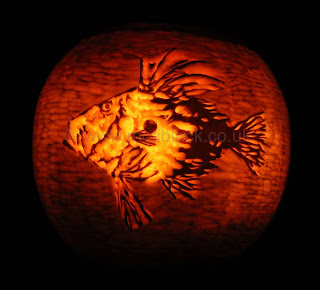 The Dory Logo (© The Dory), Pumpkin Carving by Moti Black, 2020
The Dory Bistro and Gallery kindly offered to display my pumpkins in their window for the second year running. I thought carving their logo on a pumpkin would be a nice surprise for them. 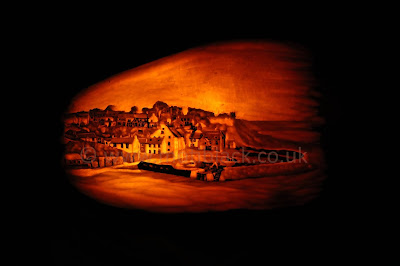 Crail, Pumpkin Carving, Moti Black, 2020
Carved on a pumpkin which I grew from the seeds of last year's Pittenweem West Shore Pumpkin, I embarked on a two day pumpkin carving marathon to try and recreate last year's success, As the pumpkin was not ripe the skin was dark green and reacted with the light differently than I was used to. It was also a bit past its best, so the flesh had a different consistency, breaking off in chunks, rather than slicing into nice controlable bits. I wasn't happy with the final result so I plan to try again next year, and I will make sure I plant my seeds as early as I can!
However, it still proved to be the most popular pumpkin of this year's carves. Thank you everyone for your lovely comments. :-) 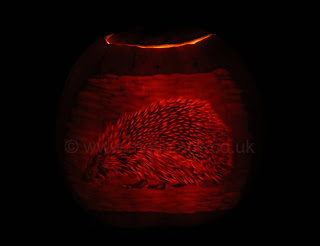 Hedgehog Pumpkin Carving, Moti Black, 2020
View this image on RedBubble
A bit tired from carving the Crail pumpkin, I wasn't planning to do this carve. But having got a friend of mine to enter a hedgehog pumpkin carving competition, she politely suggested that I move my arse and get my entry in as I still had a few hours before the deadline. This is actually carved into a rotting pumpkin, and had the trumpet and French horn on the other side. The face is a bit dark as the pumpkin was a bit thicker on the inside at that point, but it was so gross inside, I didn't dare go in and correct that.
I got the carving in just before the deadline and won the competition :-) 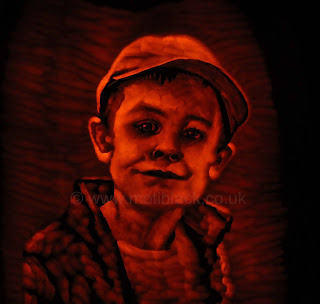 Hayden, based on a photo by James Palmer, Pumpkin Carving by Moti Black, 2020
This was going to be my last carve, as Halloween was over, my hand painful, and I really just wanted to get my manuscript ready to submit. But I still had one green pumpkin sitting on the stairs and I thought I would go back to how my pumpkin carving obsession began, and try a person. So this is my attempt at my nephew. 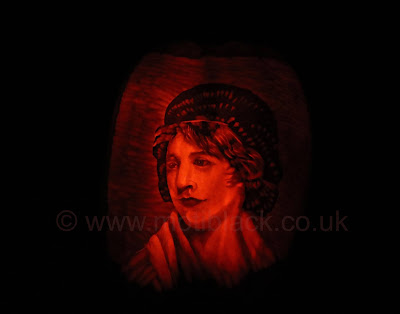 Mary Wollstonecraft, based on a portrait by John Opie, Pumpkin Carving by Moti Black, 2020
I was just going to throw out the pumpkin I carved Hayden on (which had been sat in my office slowly going off for the last three days), when a twitter thread caught my eye, so I turned my last pumpkin around, and embarked on a tribute to Mary Wollstonecraft, in which she isn't tiny, naked, and unrecogniseable. Unfortunately, the pumpkin was a bit thinner around her right eye (the one on the left in this image), and the pumpkin was a bit unpleasant inside, so I didn't go in and even out the light. Maybe I'll try it again next year.
The appeal of carving her face into a pumpkin came from the thought that she had been erased from history and her legacy was now being restored. I thought a biodegradable canvas provided a good metaphor for that. I will spend the evening with her lit up in the corner of my office, and then feed the pumpkin to the compost heep in the morning.
So that is my 2020 pumpkin season over. Thank you for all the support and comments, and hopefully I will be back with more pumpkins and ideas next year.

Posted by Caroline Blackler at 10:32