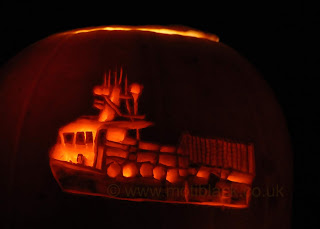 As I live in an area with a rich history of fishing, and from my window I can see lots of little fishing boats pottering about in the First of Forth, I decided the next pumpkin would be a fishing boat, and I would create a template for anyone who wanted to have a go at my design so they could try it at home.

I spent far too long going through any photos I had with boats in them and looking out of the window watching the boats out in the Forth, trying to come up with a design. Eventually I came up with a lovely line drawing, which I used to make the above carving. It could have been better, but it got to the point where I was tired, and knew it was never going to be fantastic, so I went to bed. (This challenge is turning out to be a test of how late I can stay up.)

The next day, I sat down and with the desire to keep it simple, I drew the following. I liked the design so much, it was up on Redbubble before I even started carving the pumpkin. 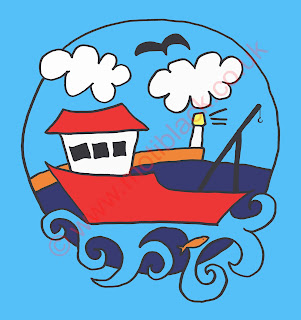 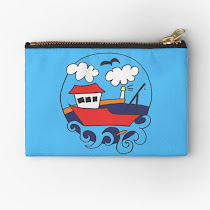 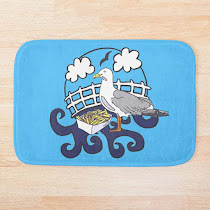 View the Seaside Holiday Range on RedBubble
Last year I tried various methods to transfer images from plans onto pumpkins. Pencils left no marks or damaged the skin, marker pens ran once the pumpkin juices welled up with cutting, and I would end up with colourful hands and stained pumpkin flesh. Covering the pumpkin with masking tape and drawing over that left me with sticky residue on my tools.

In the end, I chose sticking a printed out version of the plan to the pumpkin, and quickly going round the lines with a sharp craft knife, only cutting very shallow lines. The second I start cutting, the pumpkin releases juices, which make the paper soggy and the ink start to run, so speed is of the essence, as is planning, as lines close to previously cut lines can become blurred, and the paper harder to cut once it has got wet.

The size of the printed version is also important. If you are creating an image to be photographed, you need to bare in mind the final carving will be three dimensional, and on a curved surface. This may mean some of your lines don't look as light as you would like because the side of the cut pumpkin edge is blocking the light, or the image is bowed as it goes around the edge of the pumpkin.

Here is the pumpkin I carved with the plucky boat design on it. You may want to scan a picture your child has drawn to convert into a pumpkin design, or a tarot card, photo, or design of your own. If you are creating your own design, cross shaped patterns are good, as they can accommodate the bend of the pumpkin in the gaps of the design. As the design I have picked is circular, I had to crease the paper in four places to keep it close to the pumpkin for the tracing by craft knife.

Getting ready to carve a plucky boat.


After the lines are all recorded, you can wipe off the damp and messy paper. A flannel is good for removing the paper residue, if any has got stuck to the pumpkin.

The next step is to decide which parts of your design need to be the darkest, which need to be the lightest, and work out how many levels are in between, and which section belongs to which level.

I found converting the design to black and white helped me work out the tone I wished for each section. I then broke the design down into 7 sections, the parts which would be left with the skin on (the darkest bits) and the bits which would be carved completely through (the lightest bits). 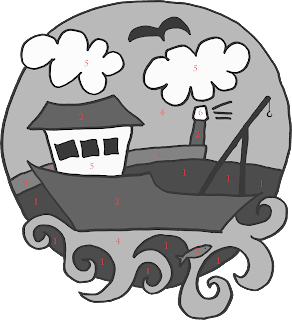 A tonal plan for the carving

The next steps is to remove the second darkest sections (those which aren't being left with the skin on.) To do this, I use a rounded wood carving scraping tool. (AKA U Gouge). So far there have been one or two in all the woodcarving sets I have bought and they are excellent for slicing away thin layers of pumpkin flesh in a controlled manner. 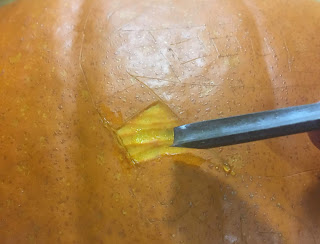 
After all the sections of the first layer have been removed, I use the same tool to dig a bit deeper for all the sections in the next level, defining the edges with a craft knife, and smoothing out large areas where an even finish is wanted with a flat edged wood carving tool. 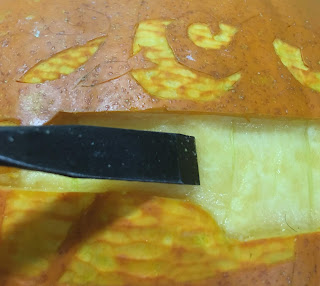 Smoothing out the next level.


I keep going down the levels, going a little bit deeper each time, but not going too deep too quickly, so that I am not through the whole pumpkin before I have go through all of the levels. 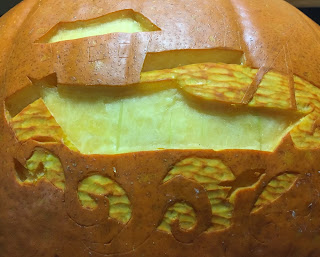 By keeping the skin on the lower levels throughout the carving, even though they will be dug out the deepest by the end of the process, I can see the original design clearly and the shapes don't get lost in the carving process. When the levels get a bit deeper, the rounded tool (U gouge) is great for sticking in, twisting and gouging out the deeper flesh, before using a combination of the U gouge, craft knife and the flat tool to smooth the level out to a consistent depth. 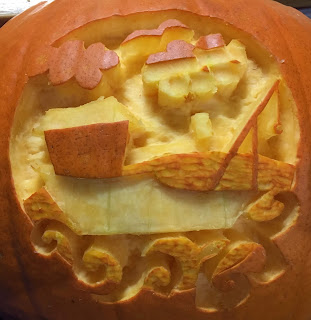 Starting to dig out the clouds, which have been left flesh deep up until this point so their shape doesn't get lost.

For this design, the final touches were sticking in my narrower U gouge and spinning it around so it cut a small circle all the way through the pumpkin for the light of the lighthouse, then I used a craft knife to cut little grooves to show the rays coming from the light house. This works very well when viewing the pumpkin in the flesh, as the light appears to flash when you move about and catch a direct line of sight to source of light.

I found that the windows worked better in photographs after I cut through the base and pushed them back into the pumpkin a little way, so although they had the same depth of flesh, they didn't stand as far forward from the pale cabin section.

Finally, I used two electric tea lights on their side and pointing towards the back of the pumpkin to cast an even, eerie light on this design for the photo shoot. If you are doing this design for a semi-dark setting, you will need a stronger light, and the clouds could be cut out entirely if you want the pumpkin to emit more light.

At which point, at 5 am this morning, I declared pumpkin 3 of the Pittenweem Pumpkin Challenge finished!

The next pumpkin will be an owl, but I am giving myself tonight off. 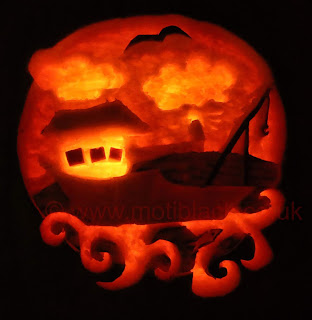 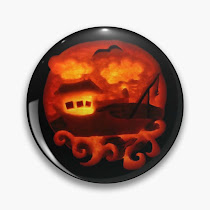 This image can be found on RedBubble, and a printable PDF of the template and layer level diagram can be downloaded here.

It probably took me about 6 hours to carve this pumpkin, including gutting the pumpkin and taking photos of my progress. It is possible to complete with a craft knife and one wood carving u-gouge, but a set of wood carving tools will give you more choice of cutting implements.

Edited to add: Later in the Pumpkin Challenge I joined a pumpkin carving group, and found out 3 layers is the norm for these sort of pumpkin designs, and there are plenty to buy and download if you have a look online.


Posted by Caroline Blackler at 15:59