I have been working on a few scenes from the East Neuk of Fife, Scotland over the last few days. I still have a few more scenes I want to do, but thought I would post these images and write a bit about the tools I have been using and things I have learned. 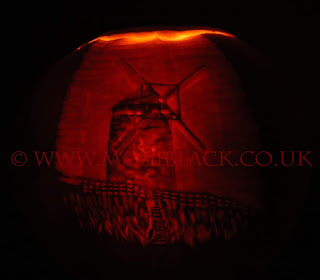 I like the mottled look for the stone on this pumpkin, but I didn't go light enough for the sky and the steps and wall messed up the image a bit. I have put this image in a folder for the designs I will be trying again next year.

I created this design with two U gouges, a wider, shallower one and a smaller deeper one, and a craft knife for the detail in the fence and the sails. The narrow U gouge is great for poking into the pumpkin and flicking out bits of flesh to create an uneven stone wall effect. By leaving some skin intact in places, darker stones and shadows are formed, and by using a pin to scratch out lines and shapes, lighter its of mortar can be created. 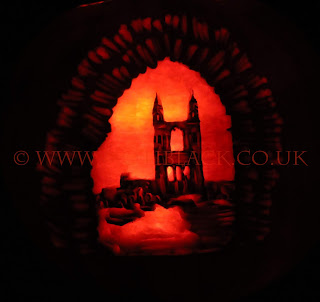 This image is available on Red Bubble 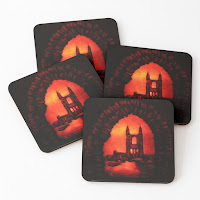 As you can see I got the sky a bit lighter in this version, and was rewarded for my efforts! It felt like I was being a bit dramatic, and was worried it wouldn't work, but I scooped out most of the flesh behind the cathedral and then I smoothed it out with another tool from my kit which I hadn't used yet, which is flat with a sharp edge at the end. 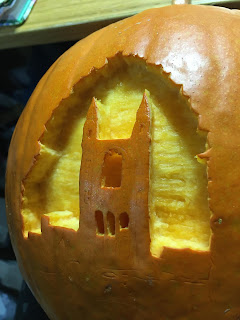 For the effect around the arch, I used a shallow U Gouge to remove the thinnest layer of skin in a radiating pattern. To be honest, this was initially to save time as carving all the bricks in would have taken a long time, but the effect worked well! 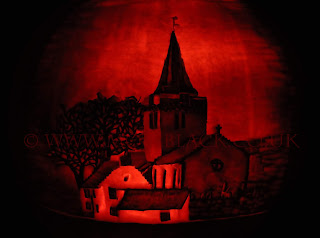 This image is available on RedBubble 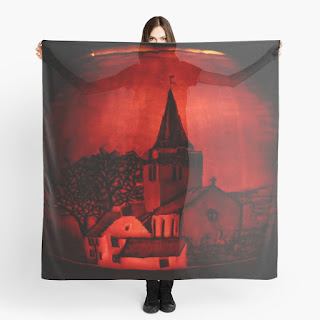 I used most of the same techniques as with the St Andrews Cathedral, digging the sky out, but for a much larger space, so I got the curve and the lines of the pumpkin in the sky. 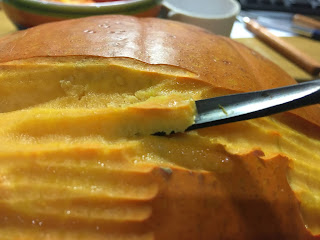 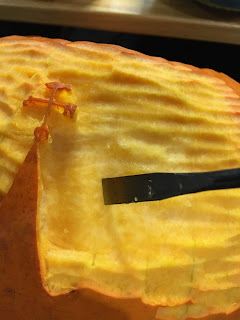 Smoothing down the sky to create a more even effect 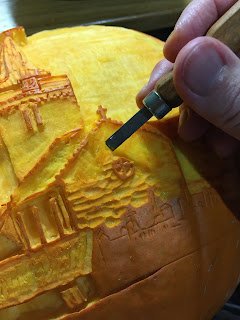 
I found the trees worked very well in this design. I used a craft knife to dig out small spaces, going as deep as I could, but not so deep that I risked damaging the bits of skin that I was leaving. Originally, there were trees on both sides of this design, but it took too long to do the ones on the left hand side, so I removed the rest of them. 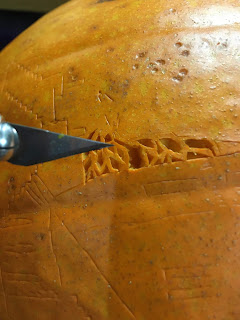 Using a craft knife to dig out the negative space between branches.

I used a long pin to scratch grooves in the roofs to give the impression of tiles, and stuck the smaller U gouge most of the way through the pumpkin to create small curved holes for the gravestones.

When I took the photo of this design, the detail of the weather vane was far too dark and prominent, so I cut the whole thing off, used the craft knife to slice thin holes into the pumpkin flesh sky, and used tweezers to insert long strips of pumpkin skin shavings to create an impression of the weather vane. 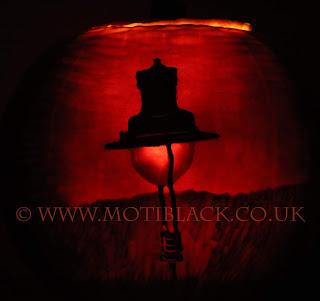 I have been looking forward to doing this design for a while, and although it looks okay, I don't think I did it justice. Maybe I'll have another go next year and take the time to get a better source photo to work from, as the street lights in Pittenweem are so fantastic. 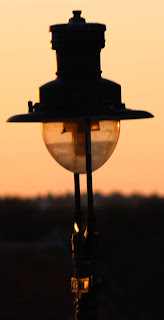 In this design, I didn't go quite as deep for the sky, so I had some extra depth to create the effect of the lamp shining. A small ridge of flesh at the edge of the light shows the shape of the lamp, and leaving the skin on for the black metal creates a nice silhouette, except I picked a bit of a gnarly bit of the pumpkin to carve this on, so there is a bit of a wobble. 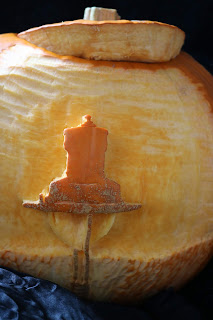 
You can carve a pumpkin with just a kitchen knife, but if you want to make things easier on yourself and get a bit more serious, I would seriously suggest picking up a couple of good U gouge or two and a good craft knife.

Over the last week, I have discovered there is a thing for carving foam pumpkins, and a whole other craft of using electric tolls on fake and 'real' kins. I only hand carve real pumpkins, so that is what my advice is based on.


Posted by Caroline Blackler at 07:56