Tarot Spread for a Writing Project

I entered the TABI pumpkin competition with the Pamela Colman Smith pumpkin from my last blog post and I won! The prize was a copy of the Darkwater Tarot by James Douglas, and the deck hasn’t even hit the shops yet! It is a stunning black and white deck, which Margo reviewed for the TABI blog here. So a huge thank you to James for donating the deck to TABI for the competition, and for everyone who voted for me and my Pixie on a Pumpkin :-)

The winning image can be seen on RedBubble here, on in my previous blog post.

Instead of writing another review of the deck, I thought I would create a spread to see how the deck works in action, and to have a challenging and honest look at my work on The Casa Martyrs.

Here is a downloadable PDF of the spread if you want to try it with one of your writing projects. 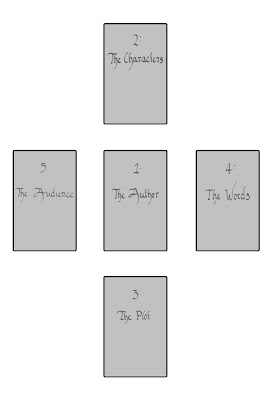 The photos of the cards from the Darkwater Tarot deck used in this post aren't very good quality, but the cards themselves are! If you want to have a better look at the cards, please visit the Darkwater website.

1 – The Author: As the creator of this work of fiction, what role do I play? Am I truly committed to helping this work reach it’s potential, or do I have other motives, distractions or limitations?

Two of Cups: There are two hands reaching out towards each other at the top of this card. The first thought that came to mind was the divine spark in Michelangelo’s The Creation of Adam in the Sistine Chapel. Maybe my ego is reaching a bit there, but certainly, this is a good card to represent my commitment to The Casa Martyrs.

This has been a long-term project, which has been pushed to the background whilst I have taken on other commitments, sometimes for years at a time, but I have finally taken the steps to dedicate the time and energy required to see this through to the end.

The two cups in the card are of different sizes and remind me of how I feel about the projects I try to juggle. These days, I can only really concentrate on one thing at a time: I focus on the big cup in front of me, it dances around, I hope I do a good job, but it is at the expense of the small cups in the background. Thankfully after a few years of culling the responsibilities which weren’t helping me maintain a balanced life, I am nearly at the position where I feel I have two cups (projects) on the go: my art and my writing. However, I am still either writing for a stretch of time, or I am painting, I can’t mix the two very well.

2 – The Characters: have I done justice to the characters in my writing? Could they be fuller, more believable, or do they have something else to say?

Maybe picking Justice reversed with other decks would say something different, but the second I saw the image of the Darkwater Tarot, I thought it could not be more apt. The Darkwater Tarot comes with the description “Rather than reverse a reading, the design and content of each card provides alternative pathways for the reader to discover.”

The title of the novel I am writing is The Casa Martyrs. On one level, “The Casa Martyrs” is just the name of a band, on another level it explores the notion of what ‘home’ (Casa) is, the sacrifices people will make for their perception of ‘home’, and the fallout when people force their views of home on other people, especially children, who are often held hostage to other people’s interpretations.

So, when Justice turns up, reversed, with a lop-sided picture saying ‘There’s no place like home’, it feels like my characters are telling me I have put them through the wringer by challenging their home lives, but I have also helped them learn more about themselves by letting them explore what home means to them, and what they will do to protect it.

In the Darkwater Tarot, there is a symbol of the tree of life on the Major and Court Cards. In the upright position, the leaves are at the top, reversed, the root system is uppermost.

In the Justice card, when it is reversed, the root system is under a bed. In Chapter One of The Casa Martyrs, The Protagonist, Kerella, finds herself in a dream:

Bending down by the bed, I reach under the valance, past those smiling yellow stars and into the more accurate representation of my childhood. Damp leaves stick to my hand. I pat the ground and sink my fingers into decomposing vegetation.

Kerella delves into the under-bed ecosystem (her subconscious) and rummages about in the roots, trying to drag out her demons to face. It is a harsh process of facing up to things that happened in the past, many of which were unjust, but she has to find a way to come to terms with them so she can play an active role in shaping her future.

The word ‘Difference’ is at the top of this card. In the Casa Martyrs, the three main characters have a presence in both the real world, and Kerella’s fantasy world. As they all have two separate upbringings and home lives, I get to play around with the environmental factors and see what character traits remain constant. For example, in her fantasy world, Kerella is brought up primarily in isolation, reading in a small room. In the real world, Kerella creates a different type of isolation and still reads a lot of books, despite having other opportunities available to her.

The Hebrew letter, Lamed, is in the top right-hand corner of the card, and the significance for the characters is the journey they will take over the course of the story. Chronologically, they start in a situation where strong but severe societal structures frame their relationships, but that is shaken up and they are sent down a difficult path which will challenge their sense of self and their view of each other. This leads them to a greater understanding of themselves and enable more genuine relationships to develop. As Lamed is often described as goading or prodding down a certain tricky path, as I am writing and proof reading, I will keep an eye out for where the characters’ development doesn’t flow quite as freely as I feel it should.

The symbol for Air is in the top left-hand corner. I have been really enjoying writing the dialogue between the characters, and as air can refer to communications, I hope this is the character’s telling me they have been enjoying the chatter just as much as me: they certainly like to take over and say things I wasn't expecting!

3 – The Plot: Does the story hold together well? Is there a good balance between detail and forward moving momentum? Are there any major plot holes? Is the story achieving what it set out to achieve?

Knight of Swords: Well, I was aiming for a fast-paced plot, but maybe the Air of Air is a bit too much, and certainly not sustainable for three books! It also runs the risk of floating off and not being grounded, alienating the readers. As the knight is wearing a helmet in the card in the upright position, I feel that if I go too quickly, the reader won’t get to see the real face of the characters.

Now my brain has gone off on a tangent, trying to work out which court card my favourite kind of plot would be. Probably the Knight of Wands, as I’d have the energy of fire combined with the momentum and communication of air.

There are two flowers at the top of the card, a black rose and a white lily. White Lilies often symbolise purity, and black roses have often been associated with danger and death. In terms of balance, I feel this is a good sign. There is also a plot theme running through my novel dealing with concepts of good and evil.

4 – The Words: How have I assembled the building blocks of my writing project? Have I used language effectively? Do I need to be aware of any bad habits I have developed?

Three of Pentacles: If you ever want the pedantry of pentacles and symbolism of a great project, this is the card!

The Darkwater Tarot has the symbol of a column in the top right-hand corner, signifying all the hard work, planning, skill and investment a successful project needs to reach fruition.

When I am writing, I like to consider myself as very deliberate in my choice of words and punctuation, as I believe these are as important to the tone of the story as the other facets of a writing project. However, there are three faces on this card, and the three of pentacles is the card of successful team work. Although I would never think of putting my work out there, self-published and untouched by a professional editor, I think this is a wake-up call that the final version will involve the input of professionals in the field who will know a lot more than me about the publishing market, and it may soon be time to recruit a willing friend or two to read through what I have written so far!

5 -The Audience: How will my intended audience react to my writing project? Does the project have any marketing potential?

The Moon: My initial reaction wasn’t very positive to considering my future readers as dogs howling at the moon, at night, when nothing is at it seems. I was making a cup of tea the next day when it hit me: this is a work of fiction that I am enthusiastic about. If other people wish to get as hyped as me about the story, I am not misleading them and just sharing the joy I have had over the years whilst I created the story.

The symbol of Pisces leads us to water, which coupled with the Moon, gives us the tides. This is telling me interest will wax and wane. When it is high tide, I have to be careful not to get carried away by the delusions of the moon, and when the tide is low, I need to remember that it will come back in, so not to get too disheartened.


Looking at the spread, one thing that stands out is the lack of fire and that might explain why I find moving forward so difficult at times. I decided a while back to finish the entire draft before sharing it with friends or approaching potential agents, but it makes for a very long dark tunnel and it is easy to switch back to art for a while, as I can show people what I am doing and bring in a few pennies to keep me going. This reminds me of a reading I did for a TABI blog post earlier this year which warned me the fiery nature of my art may distract from my writing!

On which note, I am going to put my writing to one side for a while, as I have some arty commitments I have made which need to be finished this month. However, I still plan to finish chapter 14 by the end of the year.

Posted by Caroline Blackler at 13:30