People have been telling me all week that my pumpkin carvings are amazing and keep asking me how I do it. I found this quite surprising, as before this year, I had only carved two pumpkins, both when I was much younger, and in the usual jagged smile and diamond eyes design. But I seem to have taken to pumpkin carving like a duck to water, despite actually being allergic to their innards, which make me itch like crazy!

So here are my initial observations on pumpkin carving and how I did what I did...


My first attempt (for the TABI pumpkin carving competition)

For this one, I wrapped masking tape around a kitchen knife blade and just cut straight through the pumpkin for the main design. I then took some wood carving tools and scraped the top layer off the pumpkin to create the half tone detail


My second attempt was going to be a phoenix, but after drawing the phoenix out carefully, all the felt tip came off when I gutted the pumpkin and the result was, well, not very phoenixy... 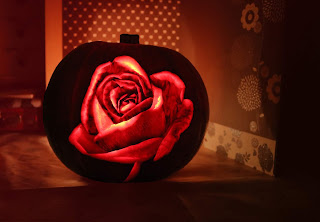 I suppose you just have to go with where the pumpkin takes you, but at least I got a red bubble image out of this pumpkin!  (Link Here)

I did most of this with a kitchen knife, carving deeper for the light bits and keeping the skin for the dark lines.

But I bought another pumpkin.

And I suddenly realised I had to carve Pamela Colman Smith into a pumpkin, even though a cat or a phoenix would have a much wider appeal... 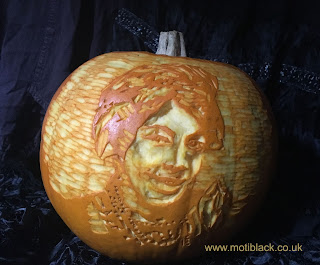 This pumpkin can be found on RedBubble here.


I found that a craft knife was much better than a kitchen knife so most of this was done using a combination of a craft knife and the curved scraping tool from a moku hanga set.

It's probably a good thing that pumpkins are disappearing from the shops, as I have a huge list of things I now want to carve into pumpkins. Anyone who knows me, knows that I am very good at coming up with plans that are completely bonkers, which probably explains the PCS pumpkin. But my current plan is next October, to carve a pumpkin a day for all 31 days.

Until then, I'll be heading back to writing, under Lydia's constant supervision.

If you wish to support a slightly bonkers author/artist, please feel free to have a look at my Red Bubble Shop


Posted by Caroline Blackler at 17:00