Caves of Caiplie, East Neuk of Fife (Near Crail)

I first saw these amazing caves in 2005, when my father, aunt and I, walked from Cellardyke to Crail along the Fife coastal path. It's a bit of a slog, but if you're a keen walker, I would recommend going and seeing them in person. It wouldn't be until 2016, shortly after I had moved to Fife from Sheffield, that I was able to visit them again.

I recently finished a painting of these caves which I had been working on for a while. It was one of those paintings I would put away for months, then pick up during rare quiet moments only to find I had completely forgotten the colour scheme I was working with, but I eventually got there and, together with my painting of my darling Snoop, it is currently at the framers, making it the joint-first painting I will have ever got professionally framed.

I have put two versions of this on RedBubble.

This one focuses more on the cave opening

This one focuses more on the cave 'hockey sticks'

There are a few other differences, the image was just a bit long to fit on all the products in one go.

Speaking of finishing things, I have also finished chapter twelve of my novel, The Casa Martyrs. I love it when everything is planned out, and the characters manage to stick 100% to the plan, but once they start talking, they do it in a way I hadn't imagined, and a much better way than I, as the boring narrating overlord, had originally decreed. I guess it pays to have invested time in getting to know each of the characters.

Chapter thirteen has now been ruthlessly gutted and restructured and is awaiting its rewrite.

Anyway, I am popping off to make a Mandolin Birthday Card, so Lyds and I shall bid you farewell.
(Edited to add: I later converted the template for the Mandolin Birthday card into a RedBubble Product, and it became one of my best sellers! The link is here.) 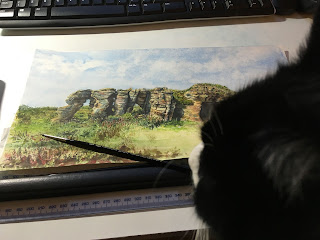 Lydia illustrating why picking cat hair out of wet paint is such a useful skill for my creative process!


Posted by Caroline Blackler at 16:01